Google Map spam keeps getting worse and there doesn’t appear to be much help in sight for beleaguered small businesses fighting against spammers in their local market. Now, it appears that trend could start directly hurting consumers.

Local SEO expert Joe Youngblood found a new supposed Local SEO agency in his home market of Dallas that looked peculiar and used keyword spam to rank as high as position #5 (relative to his location).

Upon closer inspection he found that it contained a phone number in Pakistan and used a Google Sites website. The listing appears to have been created hundreds of miles away from Dallas, then switched to a service area and the title changed to say “Asif Mehboob | Best SEO Services in Dallas | SEO Expert in Dallas”. The listing has zero reviews (not even fake ones).

This is a GMB business listing ranking for a valuable SEO agency keyword in Google Maps here in Dallas.

The listing has a Pakistan phone number and uses a Google Sites website.

It has no physical address displayed. pic.twitter.com/LXIhQYmQnp

After his post another Local SEO Expert, Yan Gilbert with Sterling Sky, found another similar listing in New York City. According to Yan’s tweet this business listing is at least 6 months old, that’s 6 whole months where someone could have called a Pakistan company thinking they were local. What’s even crazier, is that this listing uses the exact same phone number as the one in Dallas.

Was able to surface another listing. Reviews show at least 6 months old. pic.twitter.com/nCOoybBDfy

In this screenshot you can see the Dallas listing claims to service all of Texas. 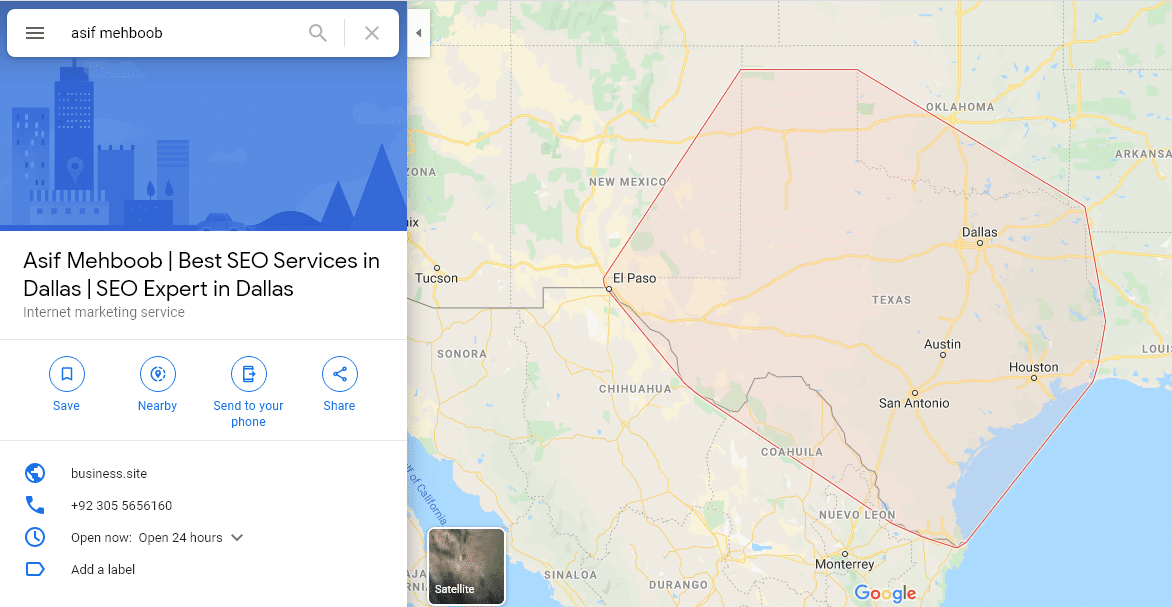 We searched for the phone number on these listings and found a Facebook page for an SEO Agency in Lahore, Pakistan called “SEO Logics”. Their page says the company was founded in 2007 and includes this little bit: “We have served Hundreds of satisfied clients from Pakistan and mostly from other parts especially from America and Canada. we Also provide Local SEO services.”

If a consumer in the USA was to call one of these listings they could be charged hundreds of dollars in international calling fees, or worse yet, fall prey to foreign scammers with little ability to get justice. While on Desktop that is less of a problem because you have to type out the number, on mobile devices it is far easier to just tap the button and call quickly without paying attention.

1. Stop allowing keywords stuffed into a business title to have such a major impact on local rankings. Joe Youngblood actually performed some research with shocking results on how well this blackhat tactic works. Sometimes having a keyword in the title makes sense, but in most local queries the name of a business isn’t an exact match to the most popular search term for that query. It’s ridiculous that such a rudimentary ranking system like this would be used by the world’s best and brightest search engine.

3. Only allow local businesses in different markets to use the same phone number under specific circumstances or if that number is a toll free calling number. Google Maps should also allow searching by phone number (it currently does not) to help researchers and consumers find clearly spam content and report it.

4. Don’t allow foreigners to create a local listing in a different country. While this would limit the scope of local SEO agencies hiring cheap labor in one country to generate listings in another, it could help reduce the amount of spam there is in many countries. There was a WSJ report awhile back where a blackhat SEO in Philadelphia said he hires people in the Philippines to make fake listings in the USA all the time.

5. When a business changes addresses or switches to from a location to a service area, this should trigger some internal review. Same for business name changes. If a business name includes a pipe character “|” then it is most likely containing keyword spam and should be delisted. Not that the Google My Business team has proven even decent at this type of task so far. Last year they mass suspended thousands of businesses worldwide and some businesses have been hit with repeating suspensions no matter how much proof they show.