Google continues to tinker with its Local Pack. They do this in part to increase user engagement as well as find a way which optimizes the success of businesses. After all, Google makes money in part by offering paid ads. The better the ad placement, the more clicks companies will get and the more often these companies will display their ads. This directly translates into more advertising money for Google. Mike Blumenthal reported on this newest change with Google’s Local Pack.

Think back to the last time you used your smartphone. Or, perhaps you’re using it right now as you read this. Do you scroll up and down (vertically) or from left to right (horizontally)? The answer, of course, is that your phone is probably set to scroll vertically. The new Local Pack changes it up a bit.

Mike gives us an example of what this horizontal scrolling looks like. He took a screenshot on his iPhone of the search term “moving companies”. Check it out below. 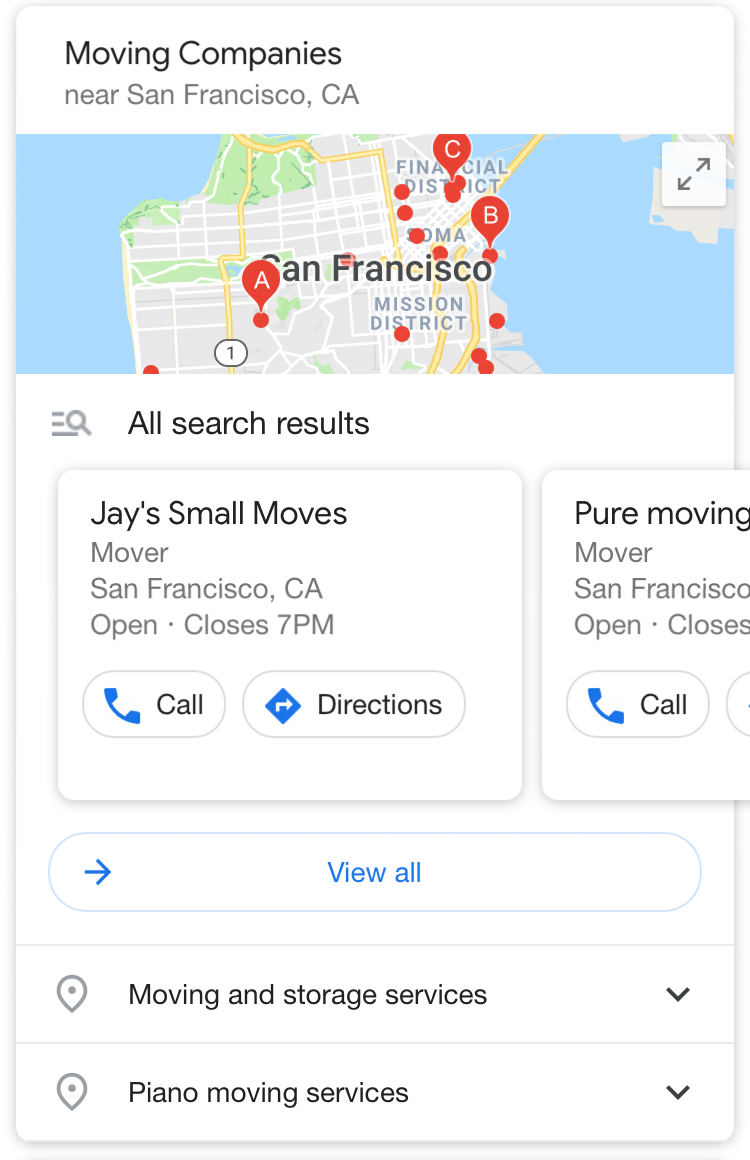 The horizontal scrolling isn’t showing in all Local search results, however. Mike continues, “It is also showing for similar searches in most other markets as well as searches for Garage Door companies, HVAC and Locksmiths. It is not showing for plumbers or handyman.”

It’s clear, then, that Google is testing this new scrolling pack and doing an eventual roll out. It’s probably that, in the near future, Google will expand the scrolling pack to include plumbers, handymen, and other related searches.

With the implementation of the new scrolling pack, search results are looking different on mobile devices. Mike continues, “while the organic local display takes up less space, Google provides two additional alternative Scroll Pack searches immediately below the primary Pack that can be accessed via a drop down.”

The new scroll pack isn’t found immediately at the top of search results. As a matter of fact, it’s found beneath paid ads and organic Yelp results. Mike writes, “When seeing this, one has to wonder if this is Google’s potential anti-trust response to Yelp’s criticism of favoring their own local results?”

Google is the world’s most popular search engine. They control most of the search traffic. Because of this, Google gets to decide, through their algorithms, what people see, and what they don’t see. Yelp, on the other hand, if focused solely as a business directory and review forum. Because of Google’s size and influence, it’s possible that they could get in legal trouble with unethically banning or degrading competitors. That’s what Mike is referring to above.

Numerous people have taken to the comments section of Mike’s page to describe what this new scrolling pack means to them.

Steven Lusby, an SEO/PPC expert, describes what he thinks this change might mean for the future of Local search. He writes, “Google is making some real power moves, with much more to come. Wait until the Gallery ads come out this Fall. I believe local SEO/Maps could become second-page news. I run a local marketing agency for veterinarians, and I am advising them to go heavy into Google search ads because the SEO situation is extremely shaky right now. Heck, I can remember when it was a Ten Pak, then to 7 Pak, then to 3 Pak and now to Scroll Pak? What? Gallery ads are huge and video ads on search are the future.”

Steven makes a good point when it comes to Gallery ads. But that’s a topic for a future blog post. Until then, get yourself acquainted with Google’s new scrolling pack.